Texas is generally a gun-friendly state. That being said, the state does have certain regulations and guidelines that apply to every legal gun owner. This extends to rules and laws that prohibit convicted felons from owning firearms. There are times when some “gray area” situations arise. One of these is whether or not you can ride in a car with someone who has a gun if you’re a felon. The firearms education pros from Online LTC, the experts to turn to if you want to take a high-quality Texas CHL class, explain the laws surrounding felons riding in cars with people who have guns.

According to the Texas Law Library, this is what applies in the situation described above. “Constructive possession” is a legal term that essentially means someone doesn’t have direct possession of something. In legal terms, it means the person who is the felon can ride in a vehicle with someone who is a legal gun owner and user in Texas as long as the felon isn’t holding or using the gun.

There’s still some cloudiness on the subject, since there may be some question as to what’s considered possession. Generally, though, if the person with you is a convicted felon and isn’t touching or near the gun, a case can be made that the individual isn’t possessing the firearm.

Common Sense Should Be Considered

If you’re not the felon in question, it’s important to use your own judgment. In other words, consider things such as how responsible the felon is and the specific charge involved. For example, if the felony conviction was for an offense that didn’t involve guns and the person is generally responsible, it may be fine to have him or her in the vehicle. On the other hand, if the person was convicted of a gun-related charge, it may be best to not bring your gun with you.

Your Firearm(s) Should Be Properly Secured

You should do this anyway. However, it’s a good idea to make sure your firearms are properly stored and secured if you’ll be in your car with a felon. This isn’t meant to be a reflection on the individual. It’s actually a matter of legal protection for you.

Let’s say you get pulled over for an incident or issue that requires the officer to do a routine check of you and your passenger. If your firearm isn’t properly stored or secured, there may be some legal issues for both of you. In Texas, take the following steps and precautions to protect yourself legally:

• Don’t leave your firearm out in plain view
• Properly secure your handgun (e.g., in a gun storage box)
• Have your license to carry with you or accessible to you

The Time Since the Conviction Matters

In Texas, residents who are convicted felons are once again able to be legal gun owners five years after completing their sentences. However, keep in mind that federal law regarding gun possession for a convicted felon is more restrictive than Texas state laws. Therefore, even if it has been more than five years, the individual will still more than likely not be able to legally possess a firearm.

Regardless of what your background is and what you or a friend or family member may have been charged with or convicted of, please consult with an attorney who specializes in firearm law. None of the information in this post is to be considered legal advice.

If you’re carrying a firearm in Texas, it’s essential to make sure you learn how to do it safely and follow all the applicable laws. Online Texas LTC is committed to providing the best firearms training available. Whether you want to take an LTC class to get your carry permit or you simply want to learn how to shoot and handle a gun safely, Online Texas LTC has exactly what you need. Give us a call today at 512-675-2206. 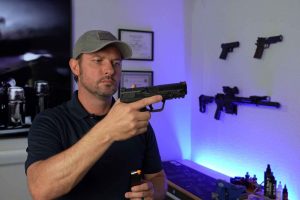 How Far Can a Bullet Travel?