Gun owners have a variety of responsibilities while carrying their firearms, including complying with laws that impact daily life. For example, drinking with friends may seem like a regular activity, especially if you aren’t driving. However, regulations in Texas govern whether you can drink with a pistol in your possession and which establishments you can enter with a gun. The firearms education pros from Online LTC, a premier provider of LTC and CHL online classes, explain more about carrying a firearm while under the influence of alcohol.

Driving while drinking isn’t the only offense related to alcohol. You can face criminal charges if you’re drunk and carrying a gun in the state of Texas. Although you’re not permitted to carry a firearm while intoxicated, you can have a gun in your possession after consuming small amounts of alcohol. However, to reduce the risk of any legal or safety issues, it would be best to keep your gun safely stored out of your possession while drinking.

Some people can consume more alcoholic beverages than others before they experience cognitive difficulties and other problems. However, your drinking tolerance doesn’t define what’s considered intoxication. If you have a specific concentration of alcohol in your blood (generally .80), you’re considered intoxicated and no longer permitted to carry a gun until you’re sober. Although you may think you have a high tolerance to the effects of alcohol, drinking multiple glasses of beer, wine, or liquor can disrupt your mental and physical abilities.

Are Bars Off Limits?

Even if you don’t intend to drink while meeting up with friends and coworkers at a local bar, it’s illegal to carry a firearm into the venue. Texas also has specific laws for gun owners regarding restaurants and cafés that sell alcohol. If an establishment receives more than 51 percent of its revenue from alcohol sales, it falls under the same category as a bar, and guns aren’t permitted. If you’re caught taking a gun into this type of establishment, you could face significant fines and extended jail time. Look for signs with “51 percent” on them. These postings are usually marked in red letters and visible in various areas of the venue.

What Are the Risks?

These laws are in place to protect both gun owners and other people. When drinking, the chemicals from alcoholic beverages can damage your brain cells and prevent you from thinking logically. As a result, you have a higher risk of dropping or negligently discharging your gun or leaving it in an unsafe area. Most gun accidents are preventable, especially those related to alcohol. Therefore, to protect yourself, your family, and strangers, avoid drinking while carrying a gun, even if you don’t plan to get intoxicated. To learn more about Texas laws, take an online LTC class. During the sessions, you can also learn shooting and storage tips and various safety precautions.

If you’re carrying a firearm in Texas, it’s essential to make sure you learn how to do it safely and follow all the applicable laws. Online Texas LTC is committed to providing the best firearms training available. Whether you want to take a Texas LTC class online to get your carry permit or you simply want to learn how to shoot and handle a gun safely, Online Texas LTC has exactly what you need. Give us a call today at 512-675-2124. 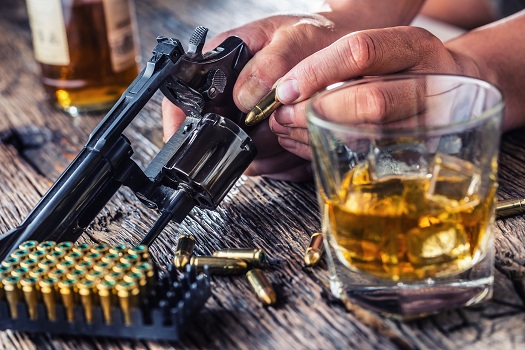 The Most Common Asked LTC Questions, All Answered.

The process to get a license to carry, formerly known as concealed handgun license, for Texas is simple and straightforward.